In this series, each Friday, I want to share a different child or group of children with you who are available for adoption and listed through the adoption advocacy website Reece’s Rainbow. All the kids who are listed on RR from Sarah’s Covenant Homes, India, the focus of my previous posts, have been posted about, so now I am focusing on a few kids or a sibling group listed on the site each Friday going forward. When more SCH kids are listed, I’ll continue to feature them!

Please note that the names used on RR are usually not the childrens’ real names, and their real names will only be shared with seriously interested families in order to protect their identity.

Today’s featured ‘Find Me Friday’ child is: Harding! He lives in an Eastern European country and is waiting for his family to find him. He is available to married couples. HARDING IS AT RISK OF AGING OUT! He must be adopted internationally by his 16th birthday (for Americans; other countries may have different age limits).

There are no photos of Harding on his profile for privacy reasons most likely related to the country in which he lives. Photos may or may not be available from his agency directly.

Harding has been diagnosed with Russell-Silver syndrome, which can cause very short stature (it can be related to primordial dwarfism). He was born with a one-way in born hip joint dislocation. He also has hypermetropia (farsightedness) and an astigmatism (which causes blurred vision). He has some intellectual delays and a neurological disorder, including external and internal hydrocephalus. It is stated that he is non-verbal, but the facilitator below has experienced otherwise. He is a wheelchair user!

Other information About Harding

Comments from our Facilitator:

When they say he does not understand and does not implement any instructions, I have a problem as it was totally different when I and an adoptive family played with the ball with him. Harding was clearly showing interest in the game, participated very well, expressed his joy and ability to throw the ball purposely to me or other people who invited him.

Meaningful sounds: he is not speaking, but when we played with him, and I was asking whether he wants me to “mesti” (give him a ball), after playing for about 15 minutes, he started to say “met” and would nod his head, smile, and laugh. So, there is a lot of potential. He is in GOD’s hands with his big HOPE for someone to really give him constant care and attention, and not only to be fed, cleaned, and sat.

Harding was always very interested when we came, and always wanted to be a part of our meetings with another child. He understood very clearly that something was going on in his group. He lives in a clean and nice environment, but definitely in an environment which does not provide any individual attention, even when he goes for classes. He likes them and is always happy, as it is his time out of the daily environment he is in.

Comments from a U.S. adoptive mom who met Harding while she was in country, Dec 2014:

It’s hard to convey just how lovable Harding is in-person. He is very small, the size of a preschooler, and thin and he has the sweetest, sunniest smile. He is definitely a favorite of the caregivers, and every time we were there, we saw someone picking him up and cuddling or kissing him. Harding just basked in this attention and affection! His gross motor skills are much better-developed than his fine motor skills, and he has great mobility in his wheelchair. He can crawl a bit and pull himself up on furniture. We played a throw-the-ball-to-the–person-across-the-circle-from-you game with several of the children, and he LOVED it! He also caught on quickly as to how the game was supposed to be played, and did a good job throwing the ball. He likes bright toys and toys that light up or play music, and he adores books, magazines, and newspapers. Many times, we would see Harding zipping by in his wheelchair to a comfortable corner where he would pore over the advertising section (full of bright pictures) from the newspaper.

Harding is curious, friendly, and seems to like being in the middle of whatever is going on. One day, he was sitting on the couch with an older boy, and Harding climbed all over the other boy, stroking his hair and pulling at his arms – a sort of toned-down version of the affectionate wrestling my typical boys do whenever they sit together. Harding’s needs are many; he does not feed himself or do any self-care, and the orphanage staff say he does not speak, but he is a charming, engaging little boy and deserves a family who will adore him and help him reach his full potential.

Follow Well, she's walking through the clouds, with a circus mind that's running wild. on WordPress.com

What I Write About 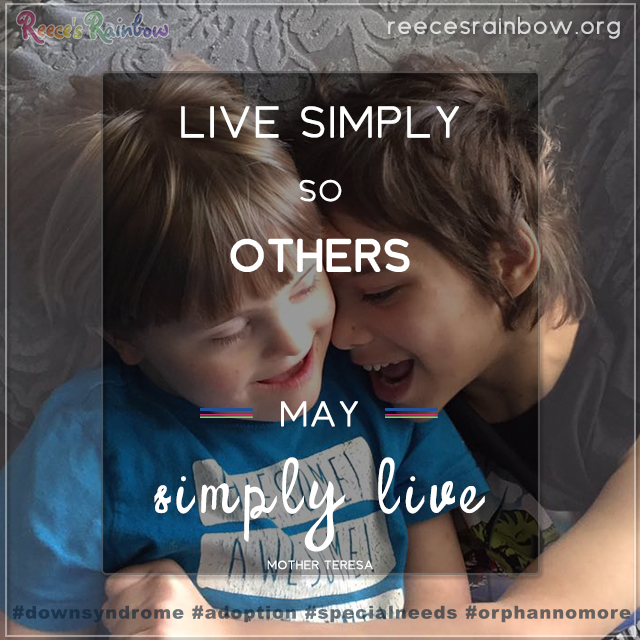 A White River Runs Through It

"I've seen you move, come move the mountain, and I believe, I'll see you do it again." -Elevation Worship

Our story of adopting a child from India!

Precious in His Sight